How do we know what we’re eating?

I do understand that we are better off being able to buy food that comes from farther away than 100 miles.  A 100-mile diet in my neck of the woods could get pretty monotonous in the winter, depending on how many veggies I managed to freeze or can before our 3-month growing season ended.  Actually, I’ve done that and, although the food tastes darn good, it’s a lot of work.   Probably not the best use of everyone’s time.   I appreciate the advantages of easily accessible food from far off sources. And I get the part about how agri-business can feed far more people more efficiently and more cheaply, the ‘more cheaply’ being the operative part here.

But I remain concerned that, without enough of us asking questions and with no public policy discussions, we don’t know enough about our food sources to make informed decisions.  At the moment, because of recent recalls, my concerns are around our meat sources.  I know that we are blessed with an abundance of meat and seafood.  And, for the most part, it is safe and edible, if not in the same category – or great taste – as meat processed close to home from animals that did not live a stressful life in questionable quarters. 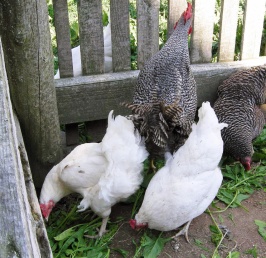 It’s one thing to close our minds to the appalling conditions factory-farmed chickens are kept in, crammed into tiny cages with no ability to move – and I won’t go into the accompanying trauma they endure as a result.  Out of sight, out of mind.  Better not to think about it. 😦  But what about the antibiotics given to the factory-farmed chickens and injected into farm-factory eggs?  Is that all ‘sorted out’ yet?

It’s one thing to close our minds to the controversy around whether beef and dairy cattle should be given growth hormone promoters.  Or do we know about it?  Has anyone told us, so we can make informed decisions?  Or does such information reach the public only when an activist digs deep and shares information about our food?  Apparently, if the cattle industry didn’t use growth hormone promoters, the cattle would grow just fine, but production costs would increase and our beef would cost us more.  Shouldn’t we be given the choice?  Do we all know that Canada and the U.S. use growth hormones in beef production that are not allowed in the EU? Do we all know that synthetic growth hormone use is approved in the U.S. to promote milk production in dairy cows while banned in Canada because of issues about the animals’ health?  How can we make personal choices about our food if we don’t know there are questions to ask? 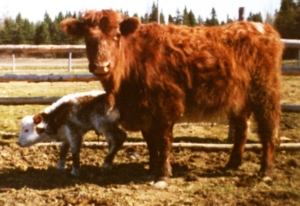 It’s one thing to close our minds to the unpleasant – and sometimes unacceptable – practices at meat-packing plants.  If we’re going to eat beef and pork the reality is that animals will be killed.  We can’t change that!  But how many of us had heard of mechanized tenderizing until recently?  In Canada, mechanized tenderizing came to light this past month because of e coli contamination that resulted in a massive meat recall.  The CFIA’s (Canadian Food Inspection Agency) investigation into the contamination at the offending XL Foods meat processing plant in Alberta, one of the biggest meat packing plants in Canada, pointed to the use of mechanized tenderizing.  We learned that, in fact, it is not unusual for there to be some e coli on the surface of a side of beef, and that cooking typically kills it.  But the use of mechanized tenderizers – which are used for tenderizing tougher cuts of meat or infusing the meat with a marinade – actually pushes any small occurrences of e coli deep into the meat, making it impossible to eradicate by anything other than cooking your meat to death.

Maybe instead of telling us that any beef we buy should be cooked to well done or worse, the people in charge of monitoring the safety of our food should be questioning the practice of mechanical tenderizing.  Maybe they could have at least let us know that such practices exist.  Right now, we consumers have no way of knowing whether the meat we buy has been mechanically tenderized or not, so we are advised to overcook all our meat to be safe!  Meanwhile, the meat industry does not believe there’s a need for labeling.  What’s wrong with this picture?

Another option being proposed by some people is to irradiate all meat before it hits the shelves.  This has been approved for red meat and poultry in the U.S. for several years now.  However, not everyone everywhere is convinced of the wisdom of that.  The jury seems to be out on the effects of irradiation on meat (being zapped with 10 kilorays of radio-isotope-generated radiation beams to kill all bacteria); questions remain as to what changes occur in the meat as a result of this zap and, also, what changes occur in the taste.

The bottom line is that we should have a better understanding of where our food comes from; we should know what ‘non-essential’ treatment has been included in the raising and subsequent processing of our meat and poultry.  It may be cheaper and for the most part it may be safe, but we deserve full information to be able to make our own decisions.  And we shouldn’t have to rely on food activists to get that information, as seems to be currently the case; our governments should insist on the consumers’ right to be informed.

Big-business agriculture versus locavorism: a rebuttal to Margaret Wente

Where did the family farms go? Does it matter?

2 Responses to How do we know what we’re eating?